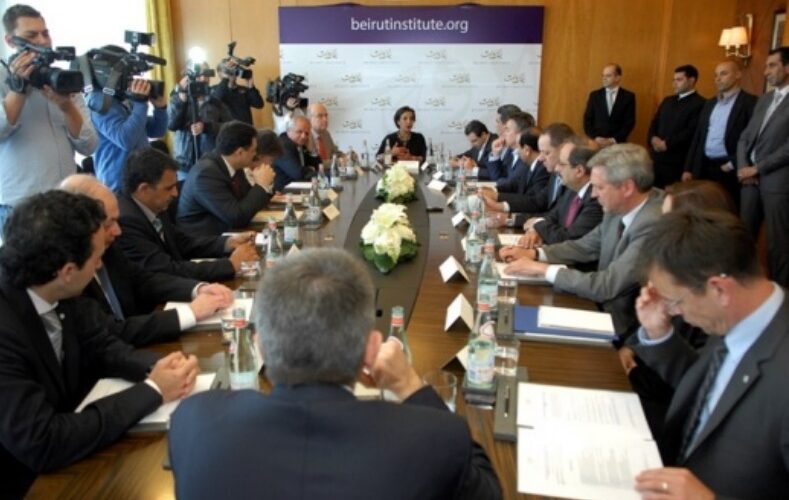 “Ethics and Politics : Response to the Plight of Refugees” ushered in Beirut Institute’s Off-the-Record Exclusive Policy Circle at a high level of local, regional and international attendance on Wednesday April 3rd 2013 at the Four Seasons Hotel in Beirut.

Humanitarian response to the refugee crisis in the region, specifically in Lebanon, was part of Beirut Institute’s Off-the-Record Series in-depth discussion on political, economic and humanitarian challenges in the Arab region.

Raghida Dergham, Beirut Institute’s Founder and Executive Director presided over the meeting. HE Peter Maurer, the President of the International Committee of the Red Cross (ICRC) was the guest of honor. Also in attendance were the Lebanese Minister of Social Affairs HE Wael Abou Faour, the Lebanese Minister of Education and Higher Education HE Hassan Diab, the Lebanese Minister of State HE Marwan Kheireddine, the Ambassador of the Kingdom of Saudi Arabia to Lebanon HE Ali Awadh Asseri, the Ambassador of the Republic of Turkey to Lebanon HE Inan Ozylidiz, the Ambassador of the Kingdom of Denmark to Lebanon HE Jan Top Christensen, the Special Coordinator of the UN Secretary-General for Lebanon Mr. Derek Plumbly, the UNHCR’s Representative in Lebanon Ms. Ninette Kelley, the Director of Economic Development and Globalization Division at ESCWA Mr. Abdullah El-Dardari, Member of the Lebanese Parliament Me. Ghassan Moukheiber, Former Member of the Lebanese Governemt Mr. Misbah El-Ahdab, the Political Chief Section at the United States of America Embassy to Lebanon Danielle Garbe, the Humanitarian Adviser at the Department for International Development Mr. Jeremy Loveless, the Head of Delegtion in Beirut at ICRC Mr. Jurg Montani, the Head of Operations for the Near and MEA at ICRC Mr. Robert Mardini, a representative of the Hashemite Kingdom of Jordan Embassy to Lebanon Dr. Aref Wraikat and the Secretary General of the Lebanese Red Cross Mr. George Kettaneh.

The discussants stressed the necessary role of the international community in handling the crisis of refugees and warned of the alarming consequences of neglecting the eroding capacity of neighboring countries. They pointed to the weak infrastructure which is rapidly becoming more tenuous due to the high influx of Syrian refugees to Lebanon and other neighboring countries. Security was emphasized by participants as both an international responsibility and that of Lebanese authorities. Education, health and economic development were identified as sectors that need to be sustained. Participants emphasized the need for coordination and leadership to boost and enhance an effective humanitarian response, which requires transparency in managing funds. Some participants called for an international conference that would explore ways of sharing the responsibility, and some proposed that Lebanon could be the transit country for refugees, while others opposed.

Participants shared their recommendations. These were included in a strategic policy paper which was presented to the stakeholders in order to better address the crisis.

To check the media coverage on this event please click here.

From H.E Peter Maurer President of the International Committee of the Red Cross (ICRC)

“As I am winding down the day, I just wanted to tell you that I really appreciated the round table. You got an excellent crowd, great discussion and good ideas in a wonderful place – well done and much more than I could have hoped for. Look very much forward to keep in touch.
Best and thanks to the whole team.”

It was my pleasure and an honor to take part in this event. I want to congratulate you and your team for the excellent efforts and commitment to the strategic issues that Beirut Institute is addressing. Best of luck and success.

From H.E Ali Awadh Asseri Ambassador of the Kingdom of Saudi Arabia to Lebanon

From H.E Inan Ozylidyz Ambassador of the Republic of Turkey to Lebanon

It was a very successful and enriching meeting yesterday. The level of attendance was also very good. I congratulate you and extend my thanks to you for hosting this exceptional event.The remarks of Mr. Maurer were especially important. I wish you all the best in your endeavour and I am certain that the Beirut Institute will bring a new dimension in the Lebanese and regional strategic thinking.

From Ms. Danielle Garbe Political Chief Section at the United States of America Embassy to Lebanon

Thank you for the opportunity to participate in the session on the plight of refugees in Lebanon. It was very well run and an informative discussion about one of the most critical issues currently facing Lebanon. I particularly appreciated your focus on finding practical solutions and hope we can continue to be part of that conversation with you and other partners as we move forward to address these challenges.